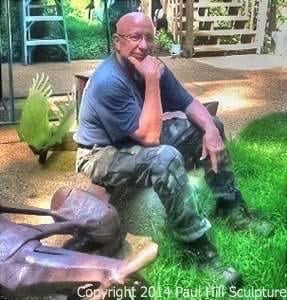 Paul Hill is a metal sculptor and painter. He was born in Tyler, Texas. Paul's family moved to Ohio, where he received his secondary education. After high school, Paul studied Fine Art & Design at Kent State University from 1966 - 1974. The untimely school delay was due to Military service from 1967 - 1971 during the Vietnam War. From 1975 through 1985, Paul worked in various Advertising Agencies as Art Director and Creative Director for National Clients such as Firestone Tire, Alcoa Aluminum and the like. Paul became more interested in working for himself as his desire to paint and sculpt became an overwhelming desire to express his own artistic vision.

Beginning in the early 90's, Paul put down his brush and picked up a torch. His steel and mixed media sculptures are now seen in numerous Corporate, Residential and Public Works of Art. Paul's work can be found up and down the Eastern Seaboard Coast. He has work permanently displayed at the North Carolina Veteran's Park, Fayetteville, North Carolina; Won "Best in Show" at the Cary Visual Arts National Sculpture Competition, Cary, North Carolina; Biennial Sculpture Show, Chattanooga, Tennessee; Detroit Diesel, MTU; Detroit, Michigan. Paul's current work is involved with the use of representational animal imagery which depicts the unpredictable human emotions and frustrations, that are daily being thrust into the lives of every person.

Hill's work can be seen in myriad of public and private art collections all along the eastern coast. Paul currently lives and works in Wilmington, North Carolina.